Save
Save your search
Please login to save searches.

X
A four storey mid-terrace house situated close to the crossroads with Boundary Road, Victoria Road and King Street. The property is in need of improvement and refurbishment, although will...

X
Investors Only - Achieving £12,180 Rent P.A The Good Estate Agent Is Proud To Offer To The Market This Three Bedroom, Three Storey Town House Which Is Located Literally A Few Seconds Walk Away...

X
A really stunning reflection of Olde Ramsgate in immaculate condition yet with opportunities of potential for any number of buyers. Set in the original High Street of Ramsgate, this home would...

X
An attractive mid-terrace bay fronted house situated in Salmestone Road which lies off Ramsgate Road (A254) close to the QEQM hospital. The seaside town of Margate, with its beach, the Turner...

X
Purplebricks are thrilled to be able to present to the market a wonderfully maintained, three bedroom detached home that really does tick all the boxes.On the ground floor there is a generous...

X
Sought after development in a sought after spot just yards from the Market Town‘s amenities.This contemporary three bedroom town house overlooks the green to the front and boasts a balcony to...

Our members are able to Save and Share their favourite properties with ease.

Ideal if you've found a property with inspiring interior design, a home you think your friend would like, or you want to share an investment idea with your builder.

Our unique Property Compare tool, along with exclusive Property Owner Reviews put you firmly in control when it comes to choosing the right property

The average property sold price in is

PropertyHeads has houses for rent in and a further flats for sale in .

The average property rent price in is

Broadstairs is home to some of the best sandy beaches in the county of Kent. Known as the Jewel in Thanet’s Crown, it combines a seaside town with its own pier and bric-a-brac shops, with a big selection of supermarkets and restaurants in Westwood Cross.

Originally a fishing development, the population of this town is now around 25,000. 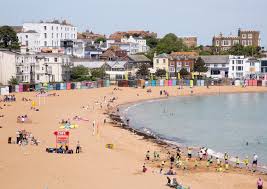 Trains run from Broadstairs to London Victoria in just under 2hours and to London St Pancras in 1hour 20minutes.

The Thanet Loop bus system runs extremely regularly, taking you to all the neighbouring areas of Broadstairs.

Broadstairs has no shortage of beaches, and the best surfing beach in England but it also has much history to offer. From Fort Houses and a Tower Museum, plus shrines to Dickins and numerous festivals every summer, there is an eclectic mix of activities.

Westwood Cross is the largest shopping destination in the area, with shops, restaurants, a casino and a cinema.

There is a selection of primary schools in Broadstairs, rated as Outstanding. If these are over-subscribed then there are several, equally good options in neighbouring Ramsgate or Margate. Dane Court Grammar School rates very highly as a secondary school and Wellesley House and Haddon Dene are independent options.

If you are moving to Broadstairs then you will find several estate agents around Westwood Cross and the station. For other services you may need to venture into Ramsgate or explore the support available on PropertyHeads.

North Foreland Road is one of the most sought after areas in Broadstairs. It is walking distance to the high street, but in a tranquil location that looks out to the North Foreland Lighthouse. There is also easy access to the Golf Club and beaches from this setting.

Properties here tend to be more expensive thanks largely to the sea views. A 5 bedroom house averages between £1.1 and £1.2 million. A 2 bedroom property is approximately £500,000. 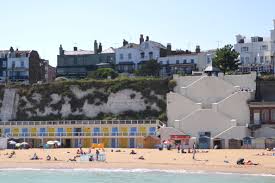 There is a large selection of retirement homes available in Broadstairs, and Fairfield Road is home to many of them. It is walking distance from the town centre.

A 1 bedroom retirement flat costs approximately £100,000 and you can still acquire semi-detached properties on this road for under £350,000 for 4 bedrooms.

St Peters Village, although only 0.5miles from Broadstairs station and less than a mile from its high street, has its own local shops, surgery, butchers, church and post office.

There is a good selection of detached and semi-detached family homes available in walking distance from Broadstairs high street, on roads such as Upper Approach, Osborne Road, Crawford Road and Church Street. A 4 bedroom semi-detached property on these roads has an average cost of £450,000.

Share this property on your wall or with selected connections

PropertyHeads recognizes the importance of privacy for users of PropertyHeads. As referred to in our privacy policy, we use cookies and related technologies, such as beacons, pixels, tags and local storage, to provide you with the services accessible through our website and our apps (together, “PropertyHeads” or our “Services”). We use these technologies to provide, protect and improve PropertyHeads, as well as to understand and measure how you use and interact with it.

A cookie is a small file containing a unique identifier that is placed in the web browser of your computer or mobile device. Cookies and related technologies, such as tracking pixels, enable our systems to recognize your device and report information back to us. Such recognition helps the efficient operation of PropertyHeads, including our website and apps.

Yes, like most websites and social networks, we use cookies in the course of providing you with our Services.

We use cookies to operate and improve PropertyHeads, specifically:

What Other Related Technologies Does PropertyHeads Use, and Why?

You may refuse or restrict the use of cookies by selecting the appropriate settings in your browser. However, limiting or refusing cookies may affect your ability to use PropertyHeads. Please note that our systems are not configured to accept browsers’ Do Not Track signals, because no industry standard for handling them has been adopted. If you want to opt out of specific third-party cookies, please consult the third party’s website or privacy policy as well as the cookie settings on your browser.